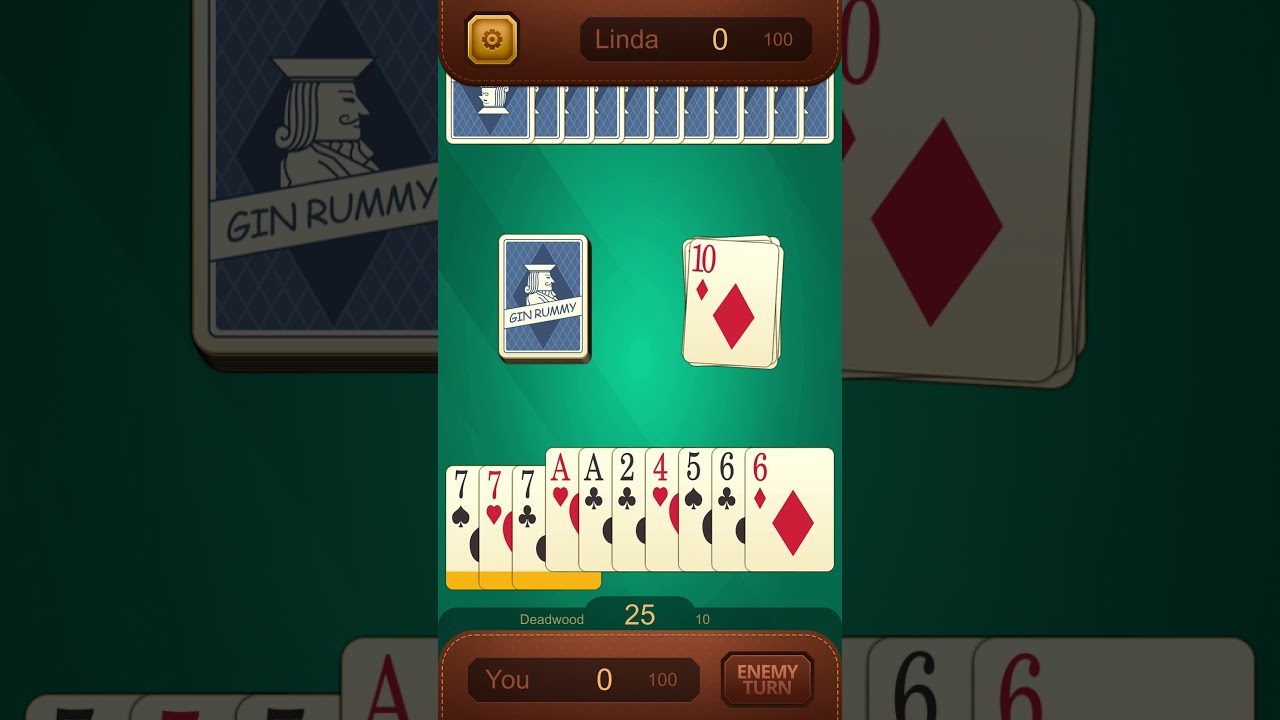 A modern classic that is one of the most demanding of all card games.

A modern classic that is one of the most demanding of all card games.
see more about Gin Rummy

THE PACK
Gin Rummy is played with a 52 card deck, the wild cards (jokers) are not used. It is best to use two decks, so that while one player deals the cards, the opponent can shuffle the other deck.

OBJECT OF THE GAME
Each player uses their hand to form combinations of three or more cards, to get more than the 100 points required to win the game before their opponent does so when played over several hands.

THE DEAL
The deck is spread out on the table and each player takes a card. The player who draws the highest card chooses where to sit and deals out ten cards to each player, one by one, leaving the deck with the remaining cards in the center of the table. The top card of the stock deck is placed face up next to it to start the discard pile. In the following games, the player who wins the previous game becomes the dealer.

Gin Rummy is the popular rummy card game. Get one card, discard another and collect the best set for the victory.

I have had other Gin Rummy games for my iPad, but they made me too frustrated. I swore the games cheated because I so seldom won. That may sound like sour grapes, but it’s no fun to lose all the time. I accused the game of cheating because (unlike a human opponent) it knows exactly what cards I had in my hand and what cards were still in the deck. Too many times I needed one card to win, but that card didn’t come up until just the moment the other player knocked and won. It knew exactly what card I needed. I realize there are players out there who are very good and can remember every card played. I am not that good. I like games where I can win at least a quarter of the time. This game has three difficulty settings. The first level is very easy and is for children or beginners. I started with that but quickly got bored with it because I won every game. I am now enjoying the middle or average setting. There is also an advanced player setting. I may never switch up to that, but if you are able to remember cards already dealt and can figure out what cards the other player has, that setting is for you. Meanwhile, I am happy with winning half the time. It’s enough challenge without being frustrating.
more less

Just played a few games and it didn't take long to see that there is an ad almost every play and these were not short ads. This makes the game boring.
more less

Compatibility with latest iOS features.
Ability to upgrade to full version with IAP.

Bug-fix for freeze when run on iOS8.

Compatibility with the new iPad.