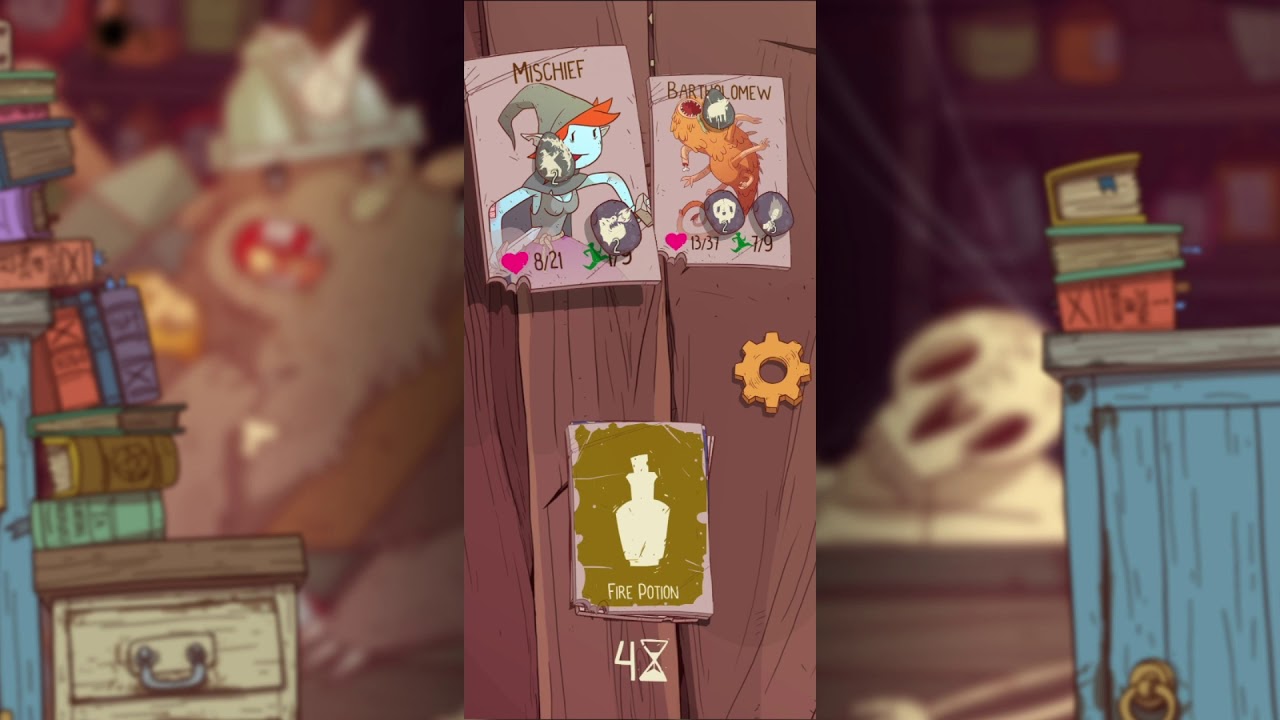 Defeat the Uberlich in this challenging, deck-building roguelike adventure!

Meteorfall is a deck-building roguelike. You'll choose your class from one of four unique adventurers, and then set out with a deck consisting of some basic attack cards. During the course of your adventure, you'll be presented with the opportunity to add powerful new cards to your deck.

No adventure would be complete without slaying a few monsters that get in your way. In battle, you'll draw cards from your ability deck. Each time you draw a card, you'll be able to swipe right to play the card, or swipe left to skip a turn and regain some stamina.

Between battles, you'll venture through a variety of locations, represented by an encounter deck. You'll encounter blacksmiths that can upgrade your cards, temples that can help you optimize your deck, and mysterious characters that will make you all sorts of bargains.

The tactical strategy of combat micro-decisions mixed with the strategic element of deck-building provides a compelling and deep gameplay experience.

As with all roguelikes, death is permanent. You'll earn some gems that you can use to unlock new cards, but it's back to the drawing board after that. Start out with a new adventurer and set out on your quest once again.

The good news is that Meteorfall is different every time you play - you'll encounter different locations, different enemies, and different quests. Part of the challenge is adapting to the challenging situations the game puts you in, given the cards available.

Good luck hero - it's time to end the Uberlich's cycle of destruction!

FEATURES
+ Challenging roguelike gameplay with an easy-to-understand deck-building combat system
+ Procedurally generated content - every adventure is unique
+ A dozen different enemies with 7 unique bosses
+ Six heroes to choose from, each with a different starting deck and unique playstyle
+ Unlockable hero skins, each with its own starting deck
+ Discover more than 150 cards
+ Daily Challenge mode with leaderboard and gameplay modifers
+ 5 'Demon Mode' levels of difficulty to unlock
+ Unlockable cards that can be easily earned through normal play
+ Google Play integration with Leaderboards and Achievements
+ Portrait orientation for casual one-handed gameplay
+ No ads, timers, or other freemium shenanigans

The game has been out for almost 3 years and there is very little content here. Replayability ends when you've tried and/or beat the game with each character which takes a few hours. After unlocking a few secondary characters, the realization that they don't play any differently, they just start with a different set of cards that you've already seen, was a bummer. It's also wildly imbalanced depending on hero and RNG. It's being disguised as 'difficulty' but it's really just imbalanced
more less

Weird balance. I bought this hoping for some level of strategy but found next to none. You get randomly one shot in the mid game for no reason, but there are characters with effects that trigger when the enemy shuffles their deck. The game tells you not to pick every card, then forces you to pick a (bad) card when you level up. Bad game 1 star. Cute art 1 star. Get card quest instead.
more less

NEW
- PERSEVERANCE: New card added for Rose "Gain 2@ and restore 1 charge to all spells. Remove from your deck for the remainder of combat (upgrading this card reduces the cost)"

IMPROVEMENTS
- Charismatic will no longer show up for Battle Royale

Fixed an issue where the FPS (frames per second) were reduced for some devices, resulting in sluggish performance

A big thank you to the Meteorfall community for all the invaluable bug reports! Got a bug? Join our Discord and type !bug to automatically log a bug. Alternately, email slothwerks at meteorfall-game.com

BUGS
Many of these bugs game from our public Discord - thanks to everyone who took the time to submit a bug report! If you join our Discord, you can type !bug or !request to easily log bugs or feature requests that you have.

BUGS
Many of these bugs game from our public Discord (any bug with a #) - thanks to everyone who took the time to submit a bug report! If you join our Discord, you can type !bug or !request to easily log bugs or feature requests that you have.

NEW
- VARFA: Brand new ranger hero, with more than 30 new cards! Join Varfa and her companions - Orhu, Caw, and Bongo - on their quest to defeat the Uberlich! Each of Varfa's 3 skins features a different companion and play style

IMPROVEMENTS
- QUICKCAST: Reworked this card. Now reads "Gain 1@. Choose a spell in your discard (up to Level 1/2/3), fully charge it, and put it on top of your deck"

BALANCE
- KRUMIT THE FRAIL: If you remove Krumit from your deck (for instance, at the Temple) penalty reduced from setting HP to 1, to instead reducing max HP by 5
- DODGE: Cost reduced 5->4; no longer gives an action when played
- Reduced gem cost for skins 2000 -> 1500
- MAGIC DANCE: Cost 3->8, now reads ''Gain 1@ and restore a charge to the next {0} Level 1 spells you draw. Cost is decreased by 1 for each uniquely named spell in your deck
- POTIONS: Now restore 1 action when drawn; no longer restore stamina when skipped

NEW
- Added new Daily Challenge mode! Each day, all players will have the opportunity to fight through a daily challenge on the same RNG seed. The game will be modified by 3 modifiers, changing the way you play the game in radical ways. Your score is only counted on your first attempt each day, so good luck! This mode unlocks after you've beaten the game with any character.

Added a News section to the main menu. Find out what's new and what's coming in Meteorfall.

IMPROVEMENTS
- Cleaned up buff tokens - they no longer will cover the health/stamina information
- Various issues & inconsistencies with equipment stacking (eg: playing the same equipment twice) have been resolved

BUGS
- MINING PICK: Fixed a bug where equipment from Mining Pick would randomly switch sides (thanks everyone who reported this!)
- Various other minor bug fixes

- Fixed a bug with max health and certain events

BUGS
- Fixed an issue where higher level Summon Wraith cards summoned Level 1 Wraiths
- Fixed bug where Wraith was always added to the top of the deck
- Fixed an issue where cards purchased from a shop shared the same number of charges
- Fixed bug which made in-progress saves from the pre-Necrodude update to be compatible
- Fixed issue where Smite didn't do bonus damage at full health, if you had Summon Golem in your deck
- Fixed(?) bug that caused an inconsistent game state after dying/leveling up at the same time
- Various other minor bug fixes

NEW
- Added Muldorf, the Necrodude (new hero!)
- Introduced shop 'bundles' - instead of random cards, cards will be selected from pre-defined bundles of complementary bundles
- Level-up: Stamina upgrade removed and replaced with an 'upgrade a card for free' option

IMPROVEMENTS
- Improved 'event selection' algorithm to prioritize more impactful events such as Blacksmith, Temple, and Shop (when usable by the player)

BUGS
- Fixed various event/card reroll exploits
- DOOM Fixed a crash related to the Doom card during the Uberlich encounter
- Fixed an exploit that allowed players to re-roll events
- Fixed a bug where players could sometimes upgrade a card beyond the max level (3)
- Fixed a bug where the 'minion counter' for Muldorf was shown in the wrong spot for iPhone X users
- FEAR: Fixed a bug where the effect only lasted on turn
- PICKPOCKET: Will no longer generate a Mana Potion when the effect triggers

IMPROVEMENTS
- Added 'Earn Gold' and 'Train' options that will replace other encounters, if certain conditions are met
- Improved UI for 18:9 aspect ratio devices
- Added a 'View Deck' button that shows up during quests
- Added an 'Ambient sound' toggle to turn off the crowd chatter
- Added support for 'upside-down portrait' orientation

BALANCE
- Spells will regain 1 charge upon resting/level-up (currently, all charges are restored)
- Dodge buff for Blinding Light reduced to 10/20/35% (down from 20/40/60%)
- Zap will appear slightly less often for Greybeard
- Inferno deals 6/9/13 damage per level (down from 6/10/16)
- Arcane Shock now has 2 charges (down from 3)
- Temples will appear slightly less often
- Lightning Storm reduced to 2 charges (from 3)